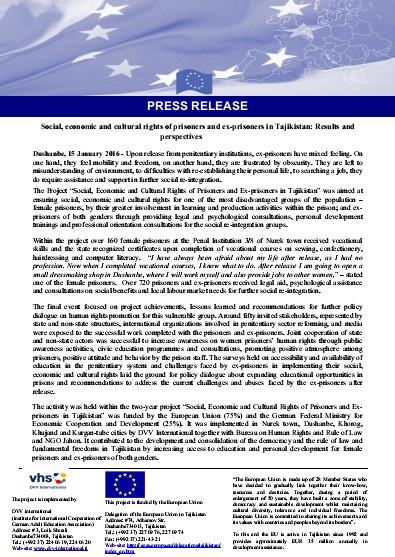 Dushanbe, 15 January 2016 - Upon release from penitentiary institutions, ex-prisoners have mixed feeling. On one hand, they feel mobility and freedom, on another hand, they are frustrated by obscurity. They are left to misunderstanding of environment, to difficulties with re-establishing their personal life, to searching a job, they do require assistance and support in further social re-integration.

The Project “Social, Economic and Cultural Rights of Prisoners and Ex-prisoners in Tajikistan” was aimed at ensuring social, economic and cultural rights for one of the most disadvantaged groups of the population – female prisoners, by their greater involvement in learning and production activities within the prison; and ex-prisoners of both genders through providing legal and psychological consultations, personal development trainings and professional orientation consultations for the social re-integration groups.

Within the project over 160 female prisoners at the Penal Institution 3/8 of Nurek town received vocational skills and the state recognized certificates upon completion of vocational courses on sewing, confectionery, hairdressing and computer literacy.  “I have always been afraid about my life after release, as I had no profession. Now when I completed vocational courses, I know what to do. After release I am going to open a small dressmaking shop in Dushanbe, where I will work myself and also provide jobs to other women,” – stated one of the female prisoners.  Over 720 prisoners and ex-prisoners received legal aid, psychological assistance and consultations on social benefits and local labour market needs for further social re-integration.

The final event focused on project achievements, lessons learned and recommendations for further policy dialogue on human rights promotion for this vulnerable group. Around fifty invited stakeholders, represented by state and non-state structures, international organizations involved in penitentiary sector reforming, and media were exposed to the successful work completed with the prisoners and ex-prisoners. Joint cooperation of state and non-state actors was successful to increase awareness on women prisoners’ human rights through public awareness activities, civic education programmes and consultations, promoting positive atmosphere among prisoners, positive attitude and behavior by the prison staff. The surveys held on accessibility and availability of education in the penitentiary system and challenges faced by ex-prisoners in implementing their social, economic and cultural rights laid the ground for policy dialogue about expanding educational opportunities in prisons and recommendations to address the current challenges and abuses faced by the ex-prisoners after release.

The activity was held within the two-year project “Social, Economic and Cultural Rights of Prisoners and Ex-prisoners in Tajikistan” was funded by the European Union (75%) and the German Federal Ministry for Economic Cooperation and Development (25%). It was implemented in Nurek town, Dushanbe, Khorog, Khujand and Kurgan-tube cities by DVV International together with Bureau on Human Rights and Rule of Law and NGO Jahon. It contributed to the development and consolidation of the democracy and the rule of law and fundamental freedoms in Tajikistan by increasing access to education and personal development for female prisoners and ex-prisoners of both genders.