Due to the current pandemic situation in Tajikistan, all courses, training programmes, and projects at the Local Community Learning Centre were canceled. However, the volunteers - participants of the different courses and programmes of the center offered their help for information campaigns for the population and more importantly - supporting the centres functionning. 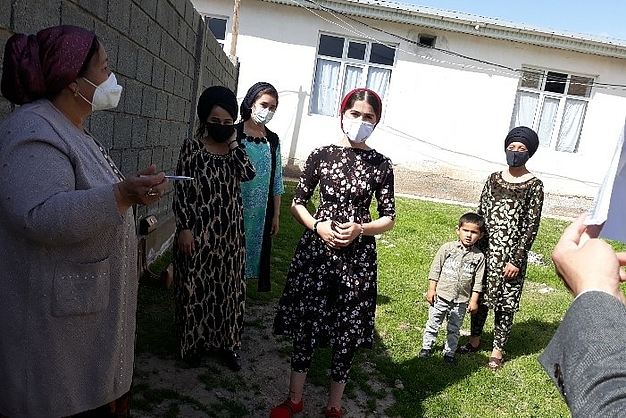 The first cases of coronavirus infection in Tajikistan were officially announced on April 30, 2020. Mass events were prohibited, mosques and churches, theaters, and cinemas were closed. In schools and kindergartens, and later also in universities "unscheduled vacations" were announced. Also, all land and air borders with neighboring countries were closed indefinitely.

All courses, training programmes, and public events at the Local Community Learning Center were canceled. However, the volunteers - participants of the different courses and programmes of the center - offered their help in conducting information campaigns for the population and in cleaning up the territory of the center. From May to June 2020, 25 trained volunteers from the local community disseminated information on the prevention of coronavirus infections and on the necessary precautions during a pandemic among the local population. During the outreach work with the population, volunteers distributed booklets developed by the Executive Committee of the People's Democratic Party of Tajikistan in the Khatlon region. In total, the campaign reached 1025 people from the local community.

It should be said that volunteering during this crucial time allowed people to unite and become stronger, more self-confident. For the Local Community Learning Center, it was an experience that allowed the local community to establish cooperation with government authorities in an unexpected crisis situation.