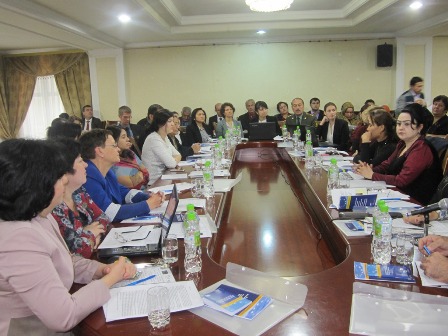 Preliminary results of the research on implementation of social and economic rights of ex-prisoners in Tajikistan conducted by the NGO "Bureau on Human Rights and Rule of Law" were presented to the general public on October 23 at the Round Table in Dushanbe.

The research objective was to study the general situation with implementation of some social and economic rights of ex-prisoners. It was the first attempt to implement a complex research on ex-prisoners’ rights and their application with emphasis on the rights to employment, housing and social protection, from the standpoint of ex-prisoners, their family members, representatives of non-governmental organizations and relevant governmental institutions. The survey covered 150 respondents, including 50 ex-prisoners interviewed in the cities of Dushanbe, Khujand, Khorog, Kurgantyube and Vakhsh district of Khatlon Province.

The most widespread challenges faced by ex-prisoners are the problems associated with clearing criminal records, reinstatement of legal documents, housing issues, relations with family members and surrounding people.  Unemployment is considered the most vital challenge for this particular group. Job seeking for the released people is complicated by employers’ prejudice against them and overall unfriendly social environment.

Representatives of government institutions, international organizations, public associations, mass media and scientific community of Tajikistan, as well as the Ombudsmen representatives and independent experts got together to discuss the proposed recommendations aimed at promoting measures on social preparation of prisoners before release and social reintegration of ex-prisoners in the society.

This event was organized within the project on «Social-Economic and Cultural Rights of Prisoners and Ex-prisoners in Tajikistan», funded by the European Union and the German Federal Ministry for Economic Cooperation and Development. The project is implemented by the Institute for International Cooperation of the German Adult Education Association (DVV International) together with two local partners – Bureau on Human Rights and Rule of Law and NGO Jahon.